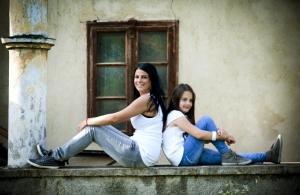 I thought long and hard about where to put this blog post – on my personal blog which is ajdowntherabbithole@wordpress.com, or here on iWonderSisters. But I finally decided that it was very appropriate for here, as most all women have issues with their mothers and our conflicting feelings about one of the most important people in our lives are somewhat universal.

My mother was a very damaged person. Her childhood makes mine look like something out of Leave It To Beaver, and her life left her much less than a fully developed human being. and a very unhappy and unfulfilled woman. As I was the first born and a girl, her identification with me was very strong. She was in a competition with me from the very beginning, and really did hate me on some level. I was prettier, more talented, and most importantly, had more opportunity that she ever did. Her childhood was truncated from a very young age, and as an adult she was needy and insecure. She was way too young and immature to be a mother, but a mother she became at the age of 22.

I hated her right back. She was always full of drama and seemingly disingenuous. I never trusted her. She was never my nurturer, my protector, my solace. She didn’t know how to be those things. As a result I felt very alone and frightened. And I became a “daddy’s girl”, something that would get very fucked up as I got older – for both me and my dad. And I think my mother may have felt very much on the outside because of my relationship with my father.

She was very hard on me, very critical, and sometimes downright cruel. And I think she had no idea how much she hurt me. As an adult – such as I was – I believed that I understood the complexities of her psyche, and tried not to take her cruelty personally. But that didn’t always work for me. I felt unloved. That was the bottom line. I knew she hated me and often that was all I knew.

This all being said, I recently had a revelation about my mother that changed everything for me.

Working as an actor as I did meant I traveled often. Even when I lived in England I was frequently working outside of London.My parents always came to see me in performance. Wherever I was. When I played Guinevere in “Camelot” in Ohio, my mother flew out there by herself to see me perform. I was actually very surprised that she traveled on her own.  When I did “Fiddler” in London’s West End my mother and a friend of hers came there to see me and meet Topol. She bragged about being my mother and was very proud – whatever else she might have been feeling. And when I did “South Pacific” in Coventry both my parents came and sat beaming with pride.

And there was another thing she once told me that I will never forget. She and my dad went to see “A Chorus Line” on Broadway, and it touched my mother so deeply that she cried during the entire show, seeing each of the characters as me. It was like she suddenly understood what my life was about. In telling me about this experience, she actually became my mother for real. And when I remembered this only just recently, my feelings of anger and hurt were transformed and I really “got it”. She did love me after all. In her own way and on her own terms; and though it may not have been satisfying for me as a child and growing up, the love in fact was there. And she was proud of me too.

I don’t know why this memory resurfaced for me in the last couple of weeks, but it has given me permission to love and need my mother. To even cherish our deep emotional connection – something that was so contentious when I was young. I no longer hate this woman. I feel truly sad for her that she didn’t get to know me better when she was alive. But I believe she knows me now, and that her pride in my accomplishments – not the least of which was to work through her bad parenting – is deep and abiding.